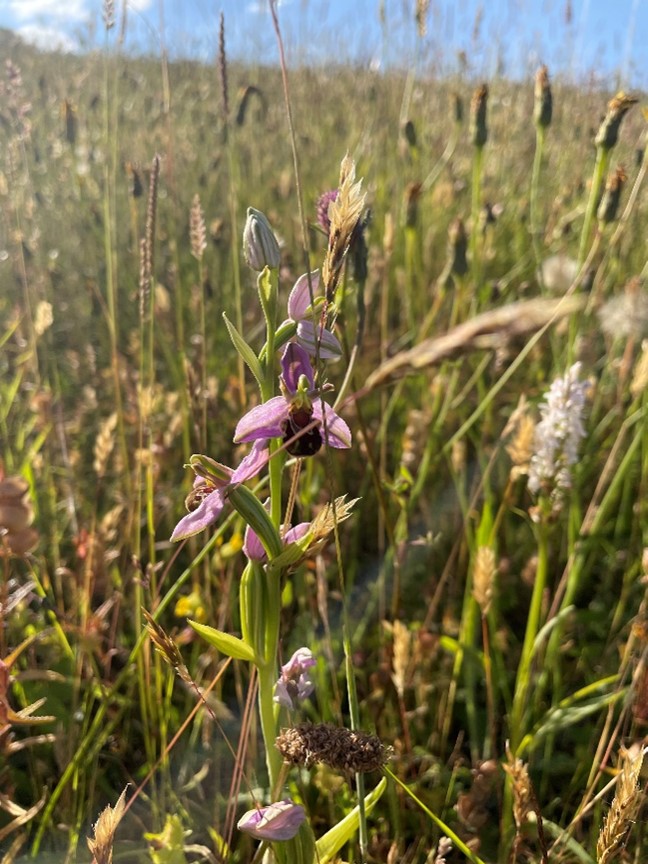 B-Lines is a network of 3 km wide, ‘insect super highways’ running through the landscape, urban and rural, running north to south and east to west. We are focusing flower-rich habitat creation and enhancement work within these corridors, creating stepping stones of pollinator friendly habitat to enable pollinators to move more freely through the landscape. Many small, solitary bees will only travel up to 300m to forage between feeding areas, so large arable fields that separate small flower-rich areas can be a barrier to their movement.

Since the 1930s 97% of wildflower-rich grasslands in England (an area the size of Wales) have been lost, reducing the food and shelter for an abundance of wildlife, especially pollinating insects. In an effort to replace some of this lost habitat, flower-rich grassland is being created and enhanced along the B-Lines network, by individuals and organisations working alone and in partnership with Buglife. This includes community groups, councils, businesses, water boards, charities and, of course, farmers, as the managers of around 70% of the UK countryside.

Many farmers invest time and resources into supporting nature on their land through involvement in Agri-environment Schemes or by signing up to the Fair to Nature certification scheme. Within these schemes, there is an emphasis on making space for nature and on the creation and management of flower-rich areas for pollinators, work which also supports B-Lines.

James Hawkins of Warren Farm, Herefordshire is a tenant farmer and chair of Herefordshire Meadows, who with support from Plantlife, the Prince of Wales Charitable Foundation, Duke of Cornwall’s Benevolent Fund and Herefordshire Meadows has created and restored around 16ha of species rich grassland across four fields within B-Lines in just the last few years.

At Warren Farm, where environmental management is at the heart of the farm business, James’ driver to create these flower-rich areas is to help wildlife, especially pollinators, thrive on the land they manage. Some of the fields are currently within a Higher Level Stewardship agreement and will move to the species-rich grassland management options within the new scheme.  James explained that two of the fields were arable reversion and two were permanent grassland. One of the fields was “that one bad field that everyone has”, where James managed to prepare the seed bed through a hay cut and then scarifying, avoiding the need to spray it off.

Farmers often struggle to prepare a site for the creation of a wildflower meadow without the use of herbicides such as glyphosate, as understandably the regrowth of weeds can result in work further down the line. However, increasingly, wildlife-friendly farmers are trying to find ways to work without or with minimal use of herbicides and pesticides. Something which we at Buglife, fully encourage, as this results in a safe, chemical-free environment for pollinators and other wildlife.

Once the seedbed had been prepared, they used a combination of brush harvested seed collected from a nearby species-rich meadow, and commercial native wildflower seed from Emorsgate Seeds. When creating wildflower rich areas for pollinators, the most valuable areas are often those which use either native locally sourced or grown seed, as these recreate the grassland communities naturally found in their geographic area. Using local seed means that plants will be adapted to local conditions (soil, climate, pests and disease) and that plants will be used by the resident insect species which are also adapted to these plants and their flowering times.

Slits for the seed were cut using a scarifier and the spread seed was then rolled in. Three years later, and the fields are awash with native wildflowers including Bee Orchid, Yellow Rattle, Birds-foot Trefoil, Red and White Clover, Common Knapweed, Autumn Hawkbit and Common Spotted Orchid, and an abundance of pollinators and other insects. The area is managed most years by an annual hay cut after the 15th July. During some drier years it may be mob grazed by cattle or sheep instead of the cut.

I think you will agree that the meadow looks amazing and along with the wildlife benefits, the meadows provides nutritional hay for farm stock.

We would love to hear about similar work that other farmers are carrying out to benefit pollinators as we are writing case studies to enable farmers to inspire other farmers. Please contact us at info@buglife.org.uk to share your work, including what does and doesn’t work.

Visit Buglife’s interactive web map to see if your land is within a B-lines and please add any work you have done for pollinators on to our map.

For guidance in creating and managing wildflower-rich grassland have a look at Land Owner Guidance – Buglife.

All photos are credited to James Hawkins.

Tomorrow is grown from our actions today